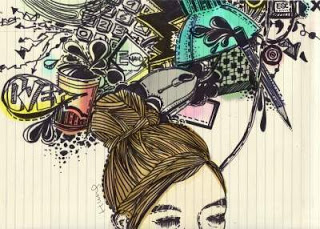 Then there was total silence. It was broken repeatedly with the ‘tring- din’. Yet there was no response. Huddled in the corner, she shivered in spite of herself. She was determined. Come what may she wouldn’t answer that call.

A few years back, she would make sure to answer the buzz instantly. It was then! She couldn’t bear the sound of that gadget any longer. There was no respite. It wouldn’t stop until she paid heed to it. The instrument ran her life, currently. She was its slave. Try, however, she may, it was futile. It wanted to get heard.

Times had changed. Once she governed her own life. She called- demanded people’s time and significance. Yet today the role had reversed. The one she ruled was ruling her off late. Alas! Was there an end? If only she were deaf or dead! She wasn’t a masochist, though for she could never pierce and damage her ear drums with screwdrivers nor could she take her own life.

She was in a daunting zone- was shattered. Not anymore! She couldn’t take it anymore.

Anna sat on the cold floor shivering. She was alright in the freeze than to enjoy the comfort of her room where that much-hated object lay- her phone. Anna had been reduced to a heap of sorrow. The last few months had only brought bad news. She had received calls about her retrenchment from her workplace.

The place she worshiped; her vault that paid her that huge remuneration. The only good news that wretched ‘thing’ communicated was of her sister becoming a mother of healthy twins. Once she had heard her friends laugh, cry, bitch and chat a little more. She had loved to participate in those discussions. Not today.

This day was different. The thought of the phone receiver against her ear was nerve wrecking. It pierced her soul with fear. Wrapped in her sad thoughts, she missed the first few rings until it haunted her again. She didn’t know when, however, she had fallen asleep.

A buzz awoke her. She tried to ignore, yet it stayed. She opened her eyes to the summer afternoon. Rays of the sun filtered into her room. “You better get up and get that.” Sleep had cleared the fuzz a little. It had transferred sunny warmth and a little courage. She wobbled to the phone, the ring had stopped, yet the display light showed a hundred calls missed. Anna wondered the century of chances she had missed in life.

Clearly, it wasn’t something that was displayed on some wretched screen. Anna lived with her own demon, never shared her pain. She couldn’t get it all back, she knew. Why retrieve the phone calls she had missed, then? She closed her eyes and asked ‘Siri’ to erase the call log.

Suddenly it re-commenced- the ring! Startled! Scathed by the objectionable item, she dropped it from her shivering fingers. Nonetheless, it rang and rang. She blocked her ears with cotton balls. Yet, she heard them- the ‘tring-dins’.

She rummaged through her belongings to cover her head with a scarf- no respite. Then the helmet-no it still had her ears exposed. Now she tried to glue some Thermocol roughly cut into ear sized rounds, they fell off. She hid under the mattress of the bed and piled her head with pillows. No, they wouldn’t leave- the sound wouldn’t stop.

There was that din, then the door bell. Oh! How she hated that summoning blare! It kept on too-ringing. And then there was the banging on the door. Panic attack! She was stunned into that black space. No one could get her now. No one……

She didn’t know how long it had been there. She felt safe. And then the beeping, that she had never heard before pierced through her consciousness. It was as creepy as it could get. She had to hide again. She tried to get up, she couldn’t. Something was pulling her back. Scary, very chilling were the thoughts in her head. Eyes- she had to open them. She had to see, find a new place to hide. The beeps were now faster than before; as fast as her heartbeat.

And then she heard the shuffling! “What’s that?” She was back in her safe place again.

Shuffling although fearsome could lead to her silent place. Anna was safe again. And the peace continued, uninterrupted. Until that light shone, the beep returned. Still insecure and unsure she had somehow mustered enough courage to open her eyes.

Everything was white- the bed, the walls, the pillows, the bed-sheets, the floor. The only color was her blue. The beeping machine looked machine-like. On her left was a huge window. And on her right, some masked people were approaching her. Some wore white too.  The other two wore green overalls. They didn’t scare her. Not even with their white masks. She must be in heaven now. They must be those Angels God had sent to watch over her. A man removed his mask, smiled at her and said, “How do you feel, Anna?”

Anna replied, “Heaven is a safe place. Thanks for having me.”