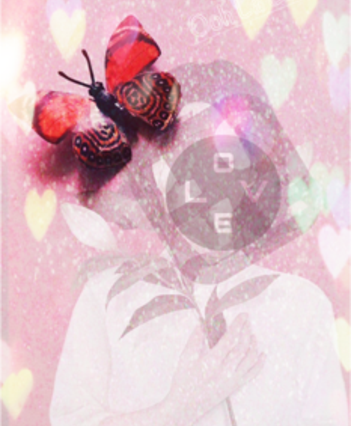 Hardbound in red, with gold ink etching out the name 'Incognito Inamorato' winked wickedly at Lana.

The very cover of the stationery made her cringe! For years she had poured her heart out in it. She had once thought it to be her best friend; the one who knew everything about her one-sided love, her wishful thinking, her angst, her jealousy, her fears- every emotion that 'he' evoked in Lana. The Diary was her witness.

Lana reasoned how it was important to move on, to survive. It was crucial to surrender to hopelessness, for new hopes to sprout.

The only way she could make a fresh start was to let the diary go.

With a deep breath, tears rolling down her eyes, she walked down the stairs, into the living room; opened the door to the porch- resolutely walked further until she reached the picket fence at the gate where the black garbage bag lay abandoned.

She carelessly tossed the diary, never looking back. The Diary almost wilfully somersaulted from the edge of the garbage bag into the center of the pavement. A resolute Lana hadn't looked back, she wouldn't look out of the window where her beloved diary could be seen lying alone, sad.

Dave in the other part of the same neighborhood cursed under his breath as we walked through the pavement. He had had enough! After years of squabbling more than loving, he wondered if his childhood romance with Summer was a mistake. She had believed it was! She had given him an ultimatum today. He should either propose or stay away.

Dave loved Summer, yet a niggling thought was growing into a shout in his head, "It was puppy love. Don't commit!" Distraught emotionally exhausted romantically, Dave kicked the few dry leaves on the pavement and strode away quickly until a light object touched his toe.

The red Diary smiled invitingly at Dave, shimmering in the street lights. Dave was longing for a change in mood. He would rather read a stranger's secrets than prod on his own love life. So he sat down on the side, picked up the diary and turned the pages until morning came.

He then walked up to the porch and rang the bell. Lana groggily skipped down the stairs to see who it was. A look at Dave and all her sleep was replaced into stupendous elation!

She squeaked, "What are you doing here, Dave?"

Dave looked equally perplexed! He had never known that the shy and beautiful Lana, his classmate since middle school lived just a few blocks away! He cleared his throat in wonder and said,
"Hey Lana! I found your diary. You must have dropped it on the road by mistake. I didn't know you lived here!"

Lana replied accusingly, "How would you know Dave? You have been too busy for too long!"

"You write well, Lana! It’s funny that your boyfriend shares my name”, Dave mentioned with a chuckle.

“Hey, Lana! No bad blood girl! I mean your guy is lucky, to have a perfect girl like you", Dave smilingly declared.  “I must confess, I always had a thing for your poems since Grade 6! Your Dave is a lucky dog!”

Lana with stabs of embarrassment, yet giddy with a resigned love, snatched the diary from Dave and shouted angrily as she slammed the door- "Me! Lucky! I have no boyfriend! It was always you, Dave- you fool!"

Our Song Recommendation for this Short Story