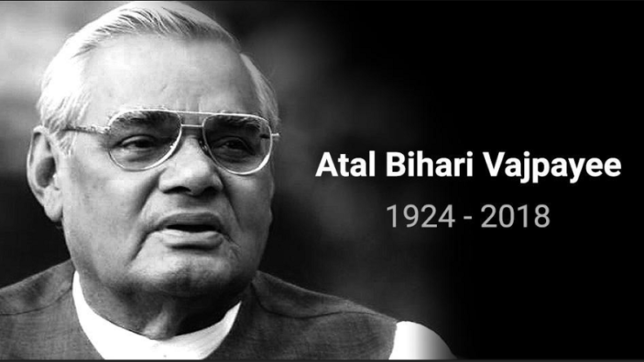 The memory of the poet, orator, politician, statesman, India’s favourite former Prime Minister will live on…

As a child, I was interested in politics. I sat with my family to hear politicians speak in the Lok Sabha. And I always waited to hear him speak.

His words made my blood rush with a patriotic fervour. His poems were my personal favourite. As a poet, I wondered if I could ever write like him. Or if my words would affect the mass with the fervent desire to uplift the world. His words did that. He made people think. His words always ensured positive and progressive thoughts in one and all. That was the power of his words.

His smile to me was the balm of the early morning sun. It brightened me. His winsome smile motivated me. It made me want to contribute in the building a stronger society that was bound by values and traditions. Yet, it drove me to think differently, to break from the dead norms. It made me learn to be modern while respecting my roots.

It was when I saw him in those sunglasses that I wondered if I had got it all wrong. That simple man had an evergreen suave. It made me confident that he was a modern man with a traditional heart.

Today, it is tough to trust politicians. He on the other hand looked and sounded trustworthy. He was a man who had friends, advisors and probably detractors. However, this man had no adversaries. No enemies! How did he manage that? But he did! That was because he was extraordinary. His strong character stood out at times of crisis and at times of joy.

Born on Christmas, call him 93 or just a man in his early 20s. The truth is, he was such a young person at heart. The sparkle in his eyes, the serenity of his smile and his salt n pepper look. I liked it all.

The only politician I ever admired and look up to is gone. He has left a void that no one can fill.

There is plenty of reason why I hold him in such a high regard. The primary reason is that it easy to get carried away when one is powerful. It is easy to get swayed when the stakes are high. Only the strongest person can forgo all the trappings of the world to toil for the nation and its’ people.

This man did. He was as his name suggested. He was strong, uncompromising, generous and unmoved by temptations. Atal Bihari Vajpayee, my favourite statesman, poet and orator will always live in my memory. He will consistently inspire me. He will forever push me to be a better poet.

The poem of Indian politics has become quiet. But we will spread his lyrics throughout the world by building a strong nation.

RIP Mr Vajpayee. You will be missed by the nation.

One thought on “Atal Bihari Vajpayee – A Man of Exceptions”