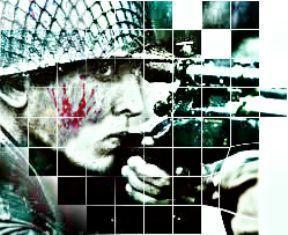 Mohsin looked at his watch moving like a perfect shot! He noticed the hour and minute hands kissing each other between 1 and 2. He has been on the deck of the two-floor corner guest house near Chiktan Fort in Chiktan village, Kashmir for straight 24 hours.

The sun was almost on top of his floor and head. He could feel the heat entering through his eyes and traveling through his spine to his feet. It was -10 degrees Celsius but he could still wish to escape the sun rays hitting directly on his minimal exposed skin. He found himself at the edge of two wars simultaneously. One was his body which was losing the immunity to stand still. The other was the armed security personnel of the Army at the Fort gate.

The Army guarded the entrance and militant coup in the area.

His hands could not bear the weight of the Norinco assault rifle- the Chinese version of AK-47.  This 9 lbs weapon felt 10 times heavier.  Holding it for straight twenty-four hours made the ammunition heavier than it actually weighed. Mohsin was a part of the rebel group which was fighting against the national establishment. The so-called war of independence for Kashmir from India was the agenda. He left his house at the age of 19 after being influenced by a religious preacher he had heard online.

The ideal visions of the inspirational speaker lured him into believing that the local government shouldn’t be the one formulating laws in his side of the valley.

He remembered the argument he got into with his father, a day before eloping. The discussion over the table was about the myth of Kashmir’s independence. Zia- ur, his father, was a son of a martyr who fought alongside Gandhi for the country’s independence. He clearly understood what bloodshed of the lost was at the cost of freedom. He tried to explain to Mohsin the mindset of fundamentalist and their ideological character. The lecture wasn’t frictional as this was a learned experience of a senior officer in the state-controlled police department. Zia- ur, had been fighting with the extremist agitating for their so called free Kashmir movement. Mohsin couldn’t agree to the litigation objections raised by his father. His father explained to him that a fight against once own land and people wasn’t freedom.

His mind was in a deadlock. Mohsin couldn’t relate to a word his father uttered that day.

Mohsin was the elder to his 12-year-old sibling. Shabana was his only prized possession. He adored her, almost raising her after their mother’s death. Walking by the lake across the Snow Mountains and collecting Chinar leaves, Shabana would tell her stories.  Mohsin would ask her questions to intentionally argue with her. He'd burst into laughter later!

Each day his schedule pretty much involved Shabana. She had the lion’s share of his time! A couple of hours with his father, he practiced shooting and enjoyed a two-hour evening stroll with Nafeesa, his charming love interest daily. His life wouldn’t be less blessed; if he could have only made it a little more worth! Sadly, it sketched out like a scattered plot.

Mohsin tried to make the flashbacks fade away! His cause was greater than any of the rosy thoughts of the past.

While his head mused about these thoughts, a bullet brushed past his ear- the distance of snail’s length. The shot was fired by the army man from the fort wall. The images of the valley, the river, Shabana, his father shouting him at shooting range started to diminish. It took him a round of second’s hand to regain his senses and get hold of his artillery and peruse the sight for his mission. He felt like being teased that nomad of a bullet; as if it was amused at his failed objective. He rested the rear end of the rifle against his shoulder and leaned back a little.

He took a good calculated guess at the target distance which approximated to around 300 meters. A target shot was something he had never been able to achieve in his life since started practicing from back in the day.

He loosened his muscles and relaxed the grip of his rifle. Mohsin slipped low and rested his back against the wall to hide his visibility. Placing his mind to work and he formulated the strategy to shoot down the target in the defense attire. The binoculars locked his sight and brain; releasing one the lenses from the front by cracking the tripod adaptor from the middle. He stood up once again and placed the Gun at the edge of the wall, circled his index figure around the trigger tightly to take control. To ease the resistance he felt from his hand, he took off his glove and tried again.

He detached the lens from the binocular and moved it towards the target so that the sun rays reflected at an angle creating a distraction. The trick worked and the officer in the array of rays moved above the covering wall at his side. Mohsin contracted his finger twice and shot two bullets straight at him, one holed onto the shoulder and the other in the face. The officer tumbled forward.

Hitting the roof of a floor, the adversary fell- finally resting on the pavement.

Mohsin leaned back again, unfreeze his grip, kissed the rifle and put it down to rest. He uncovered his face and took a heavy breath. Focusing his eyes away from the painful sight, his blood flow started running to normal. He felt proud of his shot. This, he believed was no less an achievement. He wished Shabana could have witnessed his subtlety. Mohsin also felt respect for his enemy who almost had him until eventually, the man had surrendered to the darkness!

He collected his stuff and moved towards the fort to take it into control and notify his fellow fighters. Just at the gate, he found the body of his trouble maker covered with streams of oozing blood. He bent forward to smile at the martyred face. Mohsin's smile was that of a winner. He relived the entire shot in his head and the brilliance of execution. His chest pumped with the thought of it! He turned the unresponsive body of the only witness of his act and looked into the eyes of his dead father-