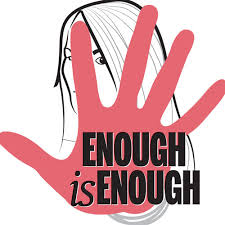 I took a public bus on my way back from a little adventure I had planned for myself. A sleazy man sat next to me and started pressing his body to mine. I kept scuttling towards the left corner but when I could no longer do so, I asked the man very politely to move a wee bit to his right.

The man exploded with invectives. He started threatening me.

A lady was sitting with her daughter just opposite us. She avoided glancing at me a support! I luckily found a seat in the next row where a girl was sitting uninterested in the old man's rudeness. I sat next to her, I shook my head in resignation, the girl looked at me with disgust and then looked away. The old shoddy man said the worst things possible about my character, my family, my upbringing and more. He did not even fall short of calling me base! No one stood up for me.

Finally, a priest, our fellow passenger on the bus asked the man, "Forgive her bro, she is a child. She made a mistake!" Is standing up for one's self-respect and security a mistake?

There are men who publically violate a female irrespective of her age. It is also imperative to remember that abuse can happen in many forms and in different degrees. Any kind of abuse is condemnable.

It was not the first time I endured such an ordeal. Every Indian girl will agree with me! Even as an infant I faced worse trouble in public places in India! The first abuse I was inflicted with was at the age of four. I remember I started crying on the street. My parents picked me up but I was too little to explain how some strange, unknown hand had violated me! Recalcitrant, many-a-times I have courageously stood up for my own protection from filthy words and deeds.

I realized that no one ever stands up for a girl, even the females themselves!

The chilling case of Nirbhaya never rests. Unfortunately, some people blamed her. They tried to dilute the level of devilry that was involved in the attack. Strangely, the youngest and the cruelest of the rapists was set free, not executed for raping and killing a promising citizen of the country.

This recent incident was again a proof of how insensitive we are to women issues. There was no outrage.

No one stood up for me. The only one who could not take the sick man's rot blamed me for the incident! There were women, who saw what happened. There was a lady who was with her daughter and it was evident she doted on her child. Yet, she did not ask the man to stop or move away. She preferred looking the other way, holding her daughter tight. We had the film #Pink starring Amitabh Bachchan that released this year and showed a similar predicament accurately.

Prime Minister of India, Mr. Narendra Modi had rightly mentioned in a speech how imperative it is to bring up well-behaved sons.

He pointed out why a child becomes a rapist as he grows up. Most male children in India are not taught to value women, stand by them and protect them. Unfortunately, a mother stops her daughter from staying out with her friends till late. Yet, she is unperturbed when the son decides to stay out at night. We bring up a girl differently from a boy even in the most democratic households.

The latest blockbuster movie #Dangal stars Aamir Khan with an assorted star cast. The movie showcases that a daughter is the pride of her family. A girl needs to be brought up to be mentally and physically superior or as capable as any other man.

No damsel is ever in distress if she knows how to fight and protect herself.

I knew how to protect myself. I did it most non-violently. After addressing him politely, I moved away. I did not reciprocate to his insinuations. I remembered to enlighten him the reason he was losing his temper. He was the guilty one! I did not budge, I did not cry. An empowered female, I stood up for myself.

I urge every woman to be stand up to be a strong, each day.