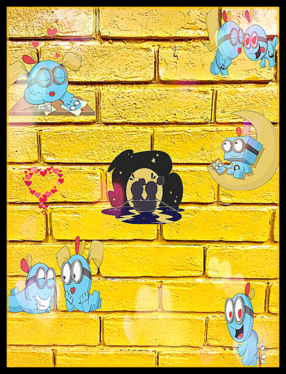 For the first time in her life, she felt that a pack of stapler pins could be that heavy to lift as she tried to throw it in her drawer. She could feel her heart go heavy with those thoughts as she tried to quickly clear up her desk. She extended her arm to the fullest and swept the desk at one go and dropped everything into the middle drawer of her Sheesham wood desk.

Stunned at how dreadfully she had let him go- actually made him go! She rushed out of her corner desk leaving behind her favorite red stole on the chair, whispering in her concerned colleague's ear about some emergency for her pale face. The stairs of the two floored building looked like an infinite to her.

She smashed the door of her office building and ran through the pavement shouting for a taxi. Some angel from heaven stopped his taxi and she occupied it without losing a breath. She ordered and begged in a single tone to the man on the wheels to drive to the airport; her thoughts on the ruined collage of her life- a life without him.

The terminal T2 was just 5 kilometers away from her office and never took more than 20 minutes whenever she traveled in the past, but presently it looked like a travel to another continent across the seas. She could not imagine the look on his face after reading the letter she left on the kitchen table.

On a yellow slip, she had burst her heart out on. She had known him for years and today it felt like never ever. She always knew there was something which staggered his smile sometimes but he never expressed. He was always caring and loving, someone who would die for her smile. He was lazy but never failed to share his feelings, except one.

She still remembered the day her father, even against his dislike of him agreed to let her move in with him. He dressed clumsily in formals; didn’t shave for a month and was often high on alcohol. Still the charm he carried in those brown eyes and double-chinned face along with the ability to accept the failures of his life without a rebuttal, left no corner of insecurity in her dad's heart that he is true to himself if nothing else.

A sudden stoppage at the corner across the foot over bridge brought her back to her senses. She observed lane of cars bumped into each other, in alarm. She quickly grabbed her wallet, took a couple of tenners and threw them on the front seat next to the driver's, collected her stuff and thoughts and ran like a train towards the airport.

Her feet felt as if they were not with hers. She tried to run faster with those heels but couldn't overcome the resistance offered by her legs. How could she just write a letter asking the guy who cared for him the most to leave her and go to the girl she thought he wished to spend his life with? She was too broken and in love with him to give up her only desire and reason to live. She loved him too much to make him stay although she knew the feeling of pain it would invest in the heart to not have his love.

What could she have done? The question kept hitting her head. She has been stubborn and a demanding girl since childhood, one who never ever shared, forget about giving up! But today she let her most prized possession go, and he was the reason for that change in her.  The only thing she could do was to let him go, she tried to lessen her pain of guilt with this thought, but it would come back with more beat.

He made her laugh and took jokes on himself, they dined out often, he bought her flowers and chocolates, and they danced and held hands at events. He even kissed her at his mother's birthday. She loved sleeping in his lap with her cheeks in his hands and arms around his waist.

Although he earned little from his hateful job, he always found time to hear her office woes. And she returned the favor with a yellow slip endorsing him to return to his earlier love and a flight ticket- a complimentary gift. And she had done it all, without confirming what he wished for.

She was brought back in time by the security personnel at the entrance of the airport; with a pounding heart and vision blurred with uncontrolled tears. She believed this poison would kill her which she herself slipped in for no grant. She took long steps, by now her feet had given up, could barely stand but she refused to lose the battle.

A piece of paper could not be the reason for her soulless life. She’d fight, beg, cry or even contest but wouldn’t let him go. Standing next to the immigration counter dressed up as he wished to live for only this moment, she thought she saw him! A sound hit her ears confirming that the flight for Sydney has left with all passengers on boarding. With her misty eyes drying up, she had imagined someone but it was actually the image of another footfall in the crowd and not him!

Her heart stopped for a minute and her throat went dry. She then recollected the images in her head and walked out of the airport unsteadily. She bought some eggs, a milk pack and a loaf of bread and walked back on her way home. There were no thoughts fighting in her brain, the feelings were all fallen.  Her feet were blue out of defeat as she climbed the stairs of her apartment.

She opened the door- her fingers devoid of any blood flow. She locked the door from the inside with no intentions to ever unlock it again and dragged towards the kitchen sink. As she unfolded the paper bag and got hold of the matchstick to light the stove, she felt a pair of hands swirling around her waist, a pair of wet lips touched her neck. She turned around and looked into those brown eyes that freed her and fell into his arms for a sound sleep.